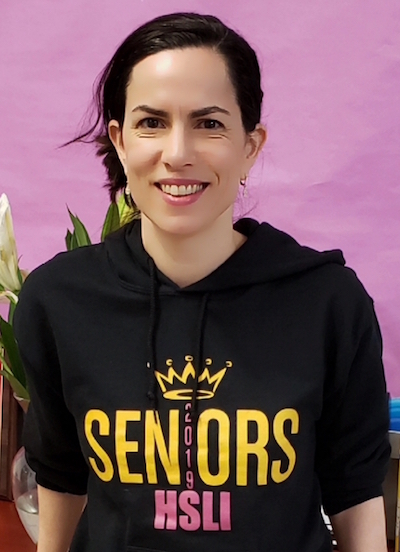 “Congratulations on your work anniversary!” wrote a connection on LinkedIn.  A few other “Congrats” popped up in the next few days.

What work anniversary? I thought.

Then I realized—I founded The High School of Language and Innovation in July 2011.  I’ve been principal for eight years.  Looking back, what strikes me the most is that a few people had enough faith in me to give me my own school.  I remember being happy, still not surprised, yet now I see the opportunity was monumental.

In 2010, the New York City Office of New Schools made it possible to start a public school.  I was working as an assistant principal in Queens, and a few people suggested I try opening my own school.  Without much hesitation, I formed a team with another teacher.  We attended the New Schools workshops and brainstormed on weekends and evenings.  We weren’t nervous about our school getting accepted—we had nothing to lose.  In Fall 2010, we submitted a proposal for The Queens High School of Language, a school for both newcomer immigrant English Language Learners and regular New York City kids who spoke English, using innovative, team-like learning methods.

A month later, I got a call from New Schools saying they had accepted my proposal with the following modifications: “How about the Bronx High School of Language? And—how about a school for only newcomer English Language Learners?”

“Yes and yes,” I responded. In September 2011, with eight teachers and four support staff, I opened the High School of Language and Innovation for 45 ninth-graders from all over the world.  By June, we were at 90 students, and we’re now at almost four hundred.  Our graduation rate for newcomer English Language Learners has been consistently above the city average.  The Office of New Schools was right about the need for our school in this area of the Bronx.

When I think back to 2010, and why New York City gave me a new school, here’s what I remember about myself: I cared about kids.  I inspired teamwork.  I had confidence.   Also, I didn’t have as much experience as other principal candidates.  I had moments of being arrogant and stubborn (I still do).  I was less likely to listen to others if they told me something I didn’t want to hear.  The New Schools team had to have seen all of these qualities in me, yet they still had faith that I’d figure it out and make it work.  And I did.

As I hire new teachers, I see their great qualities, and also their foibles.  When I tell them they have the job, they’re happy and even relieved, but not always surprised, much like me when I got the new school.  In hindsight, they might also realize how monumental it was to get this job—how much this one hire impacted their lives and the lives of hundreds or even thousands of students.

For my part, I’m grateful that New York City gave me a chance, including all of my strengths and foibles, to do the best job I ever had.